Of course, I like reading easy books. I read books for pleasure and one pleasure is being absorbed into a world, a set of characters and train of events so thoroughly that, while I'm reading it, I feel involved. I'm still reading Scandanavian crime fiction - wondering if Erlendur's life will become any more miserable and looking forward to the second volume in Stieg Larsson's Millennium trilogy.

But sometimes I'm not looking for escape or easy answers. I want a book that makes demands on me, that takes me somewhere I hadn't expected or presents me with problems I won't be able to resolve and put away as I reach the final page.

With some books, the subject, plot and characters linger powerfully. I'm still caught in the world of Hilary Mantel's Wolf Hall, which I finished only a few weeks ago. This is partly because it seems to present ethical dilemmas which resonate now: problems of wealth and poverty, the nature of influence in politics, the role of money and the market, the point at which the most well-intentioned individuals become complicit in violence and torture. But while these questions are raised, the novel also evokes a strong sense of the time and place in which it is set - it's a novel set around Henry VIII's court at the time of his obsession with Anne Boleyn.

Elsewhere the difficulty and the strangeness of part of the attraction. This is often at the level of language. I don't think I'll ever forget the delight I felt in opening a slim Penguin book in a small bookshop and finding the lines:

It's the opening of the anonymous mediaeval poem, Sir Gawain and the Green Knight, and something in the language enthralled me in a way that Chaucer never has. It was the difficulty and the sense of strangeness, I think.

At about the same time I found a copy of Teach Yourself Greek in the library and found myself sounding out the Greek word for sand - and that determined me to find a way of learning Classical Greek. I was never particularly good at it but in recent days I've picked up my Loeb parallel text of books 1-12 of the Odyssey and am wallowing in the pleasure of a language I don't fully understand and systems of customs and belief that are strange to me.

I've also returned to Finnegans Wake. It's famously difficult and I haven't got very far. I keep re-reading, relishing the language and catching the jokes. Yes! There are jokes in Finnegans Wake. Nobody warned me about that but I found them for myself. It happened as I was reading (for the third time) the passage which, I think, is about a visit to a Dublin museum with exhibits about the Duke of Wellington and the Battle of Waterlook. It begins like this, with the voice of the museum guide:

In Finnegans Wake it's necessary to hear someone else's voice and take the risk that all children take when learning to speak and read - the risk of not understanding everything all at once. Learning a language is like that too. We have to face moments of uncertainty and live with incomprehension. It's not a bad basis for life. I'd recommend more difficult books and more willingness to say "I'm not sure" or "I don't understand." After all, the alternative is clinging to the safety of the familiar and never daring to leave home.
Posted by Kathz at Monday, June 22, 2009 5 comments: 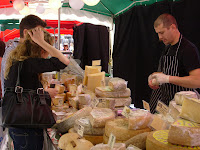 I like ordered rowdiness of markets, the generous displays of goods, the shouted conversations. Last weekend's "continental market" turned out to be Italian, with a number of Sicilian stall-holders. Locals gazed, listened, sampled and sometimes bought, delighted at this fleeting encounter with another culture.

Shopping may not be the best way to sample another culture but - for those with money - it's the easiest. Stalls arrive with polite stall-holders for their two- or three-day visit, no doubt vetted for picturesque appeal as well as health and safety. It really is delightful to practise a language when buying real cheese or olive oil or bread - and the stall-holders seem so pleased to encourage customers' attempts. I still treasure the memory of a macaroon stall at a continental market when I startled the stall-holder by greeting him in one of my three phrases of holiday Dutch.

Of course, the visiting market stalls sweep aside much of the complexity of their countries' culture - and it's not a bad thing. We begin as observers, with a picture postcard impression of smiling unfamiliarity. A market encounter couldn't possibly convey deep insights but it's a starting point - and a place to enjoy differences as small as the taste of a new cheese or the lilt of a foreign tongue.

Money seems only incidental to the pleasures of the continental market but these days money and marketing are supposed to be central to everything. Public services (how quaintly out-of-date the term "service" sounds) are told to compete and set up "internal markets". When I grew up we were expected to value health and education for their own sake but now we're expected to see them as "products" produced by competing "brands." The glossy brochures and little give-aways - pens, toys, badges, notepads - that every service produces are signs of the dominance of market forces. So are league tables and the competition for grants. People who once cared for their work have to set out their stall at the market and compete for custom. ("Our school gives free notepads and badges." "Look at the cool fridge magnet produced by this university - not to mention the dons trained in marketing and presentation." "Come to our hospital - we have glossy leaflets, handsome doctors and free pens."

By contrast, the continental markets are restrained and courteous. The stall-holders set out their wares, wait for customers to arrive and answer questions. There are free samples at times but these are just samples of what the stall-holder is offering for sale. Health and education may have been sucked into the idea of the market but - fortunately, perhaps - they don't do it very well.
Posted by Kathz at Tuesday, June 16, 2009 1 comment: 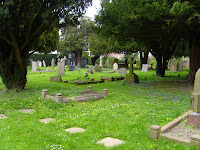 Last week, I went to the local branch of Somerfield's for the last time. Large notices proclaimed that it was one day from closure. There were already expanses of bare white metal shelving and half the supermarket was roped shut.

It was mid-morning and most of the shoppers were retired women - some with husbands - seeking the last bargains. Beside their neatly-permed hair and crisply-ironed summer costumes, I felt scruffy; for me this was a chore but for them this was an outing. They knew the assistants at the check-outs well enough for enquiries after health, relatives - even conversations about last weekend. The journey was as much for conversation as for shopping.

But the shop was going to close. "What will you do now? Will you have a job?" the shopper at the head of the queue asked, looking at the large posters that told us the nearest store would soon be two long bus-rides away. The check-out assistant smiled tiredly. "I don't know. They haven't told us."

She managed the same smile as the next woman asked and the next but I think there may have been tears in her eyes. All I could do was wish her good luck.

A few days later I saw that the windows were shielded with metal shutters. Nearby, five youths with dogs made loud and obscene proposals to a young woman walking past. She paused to strap her baby more securely in its buggy and ensure that her two older children were holding on firmly. The obscene suggestions continued despite the mother's calmness; the youths called after her as she walked away. Then the young men strolled off, heads in the air, dogs tugging at their leads. A few small, optimistic shops remain near the expanse of metal blinds. I hope they survive.

So much is coming to an end. I can't grieve for this government, but I'm anxious about what may replace them. I have to vote in a few hours and I'm still not entirely sure where I'll place my cross. I think the Greens get it. I may not agree with all their policies but they certainly care about more than just being in power - and there's much that's close to my own thoughts. I know few people who are sure of how to vote and, for the first time in a British election campaign, I haven't seen a single house displaying an election poster. People declare their trust in our MP's honesty but most say they can't vote for his party. The words "lies", "greed" and "corruption" are everywhere as the initial shock and mocking laughter turns into pain and doubt. What has happened to that old ideal of public service?

The Nottingham Music Society, formed more than 80 years ago by people who wanted to bring classical music to the city and suburbs, has come to an end. All the organisation was done by volunteers. I went to their last concert, in the wonderful, barrel-roofed Congregational Hall. The Nash Ensemble played Schubert - the Trout Quintet before the interval and then the Octet. They were both sad and joyous - the kind of music that makes me feel vividly alive. It was an apt reminder of all those people who gave so much of their time unpaid so that culture, thought and learning might live.