Back to the blood tubs: the amazing spectacle of Charlie Peace 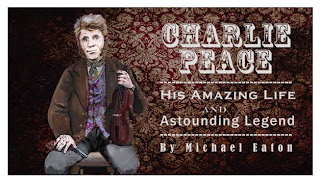 When I was a child, I was fascinated by a particular kind of penny-in-the-slot machine - the sort you found in the arcade at the end of the pier, if the pier's attractions were particularly run down.

In those days pennies were really big copper coins - bigger than any coin in use today.  If you held them tightly in your hand and your hand sweated, you would acquire a green stain on your palm.

The coins were old. too.  Particularly sought after were "bun pennies" with their image of the young Queen Victoria, with her hair in a bun - though it was sometimes hard to make her out on the battered and faded coins.  But those were coins that had been shiny new in Charlie Peace's era, though he was ambitious for more wealth than a mere penny represented.

I don't know if the penny-in-the-slot machines I loved were around in Charlie Peace's lifetime but I suspect some, at least, represented the moment of his death.  Public executions might have ended in Britain, and parents no longer gave copies of the Newgate Calendar to their children as a dreadful warning, but end-of-the-pier machines showed, as well as haunted houses and "what the butler saw," a variety of executions, including the French guillotine and the British "long drop."  While they were bleakly macabre, they also offered the final episode of an unknown story - something to spark the imagination.

Early in Michael Eaton's new play about the Victorian burglar, murderer and folk-hero Charlie Peace, there is just such a tableau.  It's part of an entertainment that harks back to Victorian and pre-Victorian popular culture.  It doesn't belong with the sedate cup-and-saucer dramas intended for upper-middle-class audiences " or the slightly later problem play which barely questioned middle-class morality.  This is part music-hall entertainment, with its master of ceremonies, music and spectacle, and part the kind of melodrama that might have stemmed from one of the "penny gaffs" or "blood tubs" that came into being when "legitimate theatre" was restricted to England's few patent houses.  There are also elements of broadside ballads in some of the songs while either side of the set are huge playbills in the Victorian mode.

The great achievement of the play and its excellent cast is that it demonstrates that this kind of spectacle, so often sneered at by theatrical critics, still works for an audience, and works exceptionally well.  While most performances in this mode are either pantomimes, which have to work for a family audience, or slightly superior mockeries of the genre, Charlie Peace engages with the mode and celebrates it.  At the time, I was too caught up in the plot to analyse my response but I recall laughing, gasping, sitting on the edge of my seat and admiring the craft and dexterity of the actors.  And while the play is not about careful characterization or anguished doubt, Peter Duncan was entirely credible as the kind of friendly villain who could be charming, anguished, angry or ingratiating depending on the company in which he found himself.

There is something serious going on too.  The play led me, at any rate, to consider why I find law-breakers like Charlie so engaging and why apparent villains have such a hold on the English popular imagination.  Plainly class is an element but it's not just that.  I wonder if Charlie Peace has a similar hold over the imagination of people who always expect the law to protect their own interests.

But you need to see the play for yourself.  It's at Nottingham Playhouse until 19th October and then it moves to the Belgrade Theatre at Coventry.   I don't know if it's touring any more widely but if I was running a theatre capable of staging it, I'd try to get this play with this cast if at all possible.  Get to see it if you can.

I would like to praise the director but unfortunately I mislaid my programme - or perhaps Charlie snitched it (it's the sort of thing he might have done) so I don't know who the director is.  The sets, by graphic artist Eddie Campbell, are marvellous and the stage technicians have evidently worked hard, to very good effect.